With the imminent solar eclipse, many of us have attained a glimpse into the effects of universal solar consciousness. All of us at some level or another has wondered the effect of this eclipse on us. Many of us have been preparing for this in some shape or fashion.

What exactly is solar consciousness?

In general solar consciousness is the effect that the Sun has on us mentally, physically, and spiritually.

I would like to offer these words from Red Queen (apprentice to Jose Arguelles) <quoting> :

The Sun is Life. It is warmth. The Sun shines its Light on all and expects nothing in return.  It nurtures all life: from plants, to animals to humans.

In our body the Sun is our Heart, and its Light is our Blood. Everything we eat, drink and breathe is illumined by the Sun, liquid gold. Sun is the Unifying force of Life. Without the Sun there would be no color, no rainbows. Plato said that the Sun is “the cause of our knowledge, without it we cannot see”. <end quote>

From my Law of Time studies: The Sun is life. The Law of Time tells us that life itself is the function of a program code originating in the radial matrix of 4th/5th dimensional time. . All of life is involved in the transformation of solar energy (light ascending in ever lighter gradations). We are meant to evolve into higher solar consciousness.According to Cosmic Science, DNA is a 64-unit biopsychic solar life code inclusive of cosmic metabolic codes. In the Quran sura 91 is “Sun”. 91 is the noospheric constant. Sura 24 is “Light” with 64 verses, DNA code. The Sun or “light of God” is described in Sura 24:35.

“God is the Light of the Heavens and Earth. The allegory of His Light is that of a concave mirror behind a lamp that is placed inside a glass container. The glass container is like a bright pearl-like star. The fuel is supplied from a blesses oil pro ducting tree that is neither eastern nor western. Its oil is almost self-radiating; needs no fire to ignite it. Light upon light. God guides to His Light whoever wills (to be guided). God thus sites the parables for the people. God is fully aware of all things.”  – Qur’an, 24:35

Keep in mind that the structure of DNA and all elements first exist as mental geometries that are projected from higher mind. These structures appear in 3D as organizing factors of atoms and molecules that create different chemical elements and structures that create the world of matter. Other lifeforms have other systems of DNA that are all mathematical at their root.With the changes in the Sun, the life codes of our DNA are now in a stage of regenesis. <end of findings from Law of Time Studies>

So how can we stay in harmony and attunement with the Sun?

The 13 Moon 28-day calendar (synchronometer) is also related to the Sun as it is embedded in the solar ring. The solar ring is a biotelepathic frequency that we tune into through the 13 Moon calendar. (which helps us to become biosolar telepaths)
So the 13 Moon consciousness harmonizes with frequencies already coded into the solar ring. These are the psi frequencies of other worlds that have attained higher consciousness beyond the evolutionary shift that we are now experiencing on this planet Cosmic History states that when the solar ring (of the Inner Sun) becomes completely conscious, time and space will be unified and a new level of harmony will be realized.

As a biosolar telepath one awakens his/her telepathic capacity. 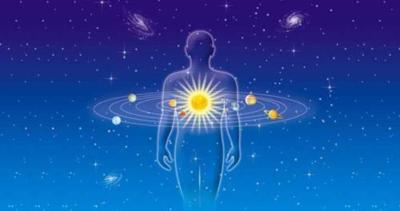 However we can also look at attuning ourselves to solar consciousness in another facet.

The sun in our universe is the great example of freedom, for, its light gives life to all things within its sphere of influence and also warmth.  There are nine planets in our solar system and each planet’s affair is regulated by the Law of Light that disciplines each planet giving it an orbit in which to rotate, from which it can never escape.  In the Bible, Jesus uses these words, “I am the Light of the World.”  He was made by Allah (God) to glorify Him, and, the Light of His Wisdom gives life to those whom His Wisdom touches, and, the warmth of His Love comforts those who are touched by His Light.

The Qur’an refers to Muhammad (Peace Be Upon Him), “As a Light Giving Sun.”  This teaches us that Muhammad in His Person, is the Light of what Allah (God) brought through Him called Qur’an, another name of which is Al-Nur – The Light. Muhammad in the beauty of His Light and Life and in the warmth of His Love, by the permission of Allah (God), gives spiritual life to all those who accept His Guidance and follow His Way. <end quote> English Translation of the Holy Quran by Maulana Muhammad Ali

In the name of Allah, the Beneficent, the Merciful.

91:2 And the moon when she borrows light from him!

91:6 And the earth and its extension!

91:9 He is indeed successful who causes it to grow,

91:11 Thamud rejected (the truth) in their inordinacy,

91:12 When the basest of them broke forth with mischief —

91:14 But they called him a liar and slaughtered her. So their Lord destroyed them for their sin and levelled them (with the ground);

Will is the quality of alignment of the third-dimensional self with the fourth-dimensional soul essence, as guided by the fifth-dimensional guardian or angel.
Cosmic History Quote
20 August 2017, day 26 of Moon 1, Magnetic Moon (26 Jul - 22 Aug)